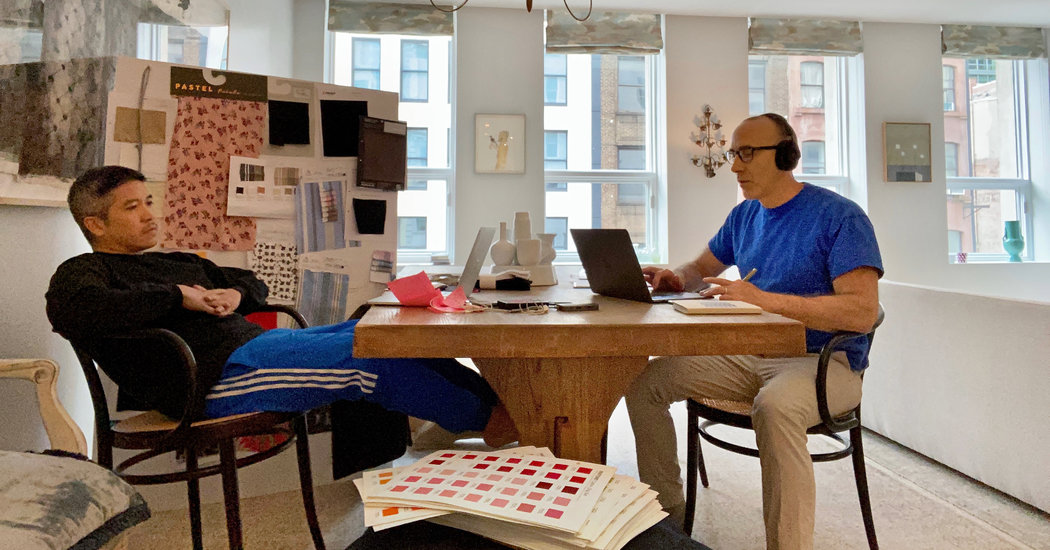 Mr. Panichgul and Mr. Spina are big on designating space for specific tasks at different parts of the day. They like to work in separate rooms to give each other privacy for calls as well as ample space for creative projects. During the workday, Mr. Panichgul uses the dining room table for fashion design, but come evening, he makes sure it’s “neat and tidy” for evening activities like dinner and a movie. That includes visual changes. Mr. Spina likes to dim the lights, put on music and light candles to create an evening mood that feels calm and relaxing. They break out a happy-hour drink, usually a glass of wine. It all feels like they met at a bar after work to discuss the day.

Mr. Spina had been taking French classes at Coucou in SoHo for a year and a half, and while quarantined, he has transitioned to taking classes online. Mr. Panichgul gives him space to continue these classes in the evenings via Zoom, but also supports his lessons by screening French films with him. It’s a new experience watching one particular genre of cinema, Mr. Panichgul said, but he loves the look of French new-wave films, so it felt natural. That extends to new hobbies, too. They have been experimenting with natural wines from various regions of the world, including the sparkling wine pétillant naturel (commonly referred to as pét-nat) and unfiltered white wines..

Be Each Other’s Cheerleader

Both Mr. Panichgul and Mr. Spina admit that their energy levels and moods have been down at times during quarantine. Luckily, they have found that they can be the ultimate motivators for one another. It’s something they took for granted before, when they were busy traveling, working, and rushing around in life. It’s been a blessing, Mr. Spina said, to realize they have the type of relationship where they can lift each other up. It’s as simple, he said, as saying “let’s do this” when one person can’t get started on the day or offering advice for frustrating situations. “You think it’s not going to help but it does,” Mr. Spina added.

Stay Connected to Your Community

Supporting the small business and creative outlets in their community like Amish Market, Chambers Street Wines to Coucou French Classes has helped improve their moods and keep each other’s mental health in check. They both feel a strong sense of loyalty to New York and want greatly to help the city thrive when it’s down. Taking on that calling means staying active: chatting with their doormen, taking a walk with masks, and continuing to shop from their neighborhood go-to retailers. They even look back fondly on the time that a fellow pedestrian snapped at Mr. Panichgul for taking off his mask for a second while walking their dog — a reminder that someone in New York is always watching. “It’s kind of a circus community experience, but it makes us feel like New Yorkers,” Mr. Spina said. “I’d feel guilty to leave.”