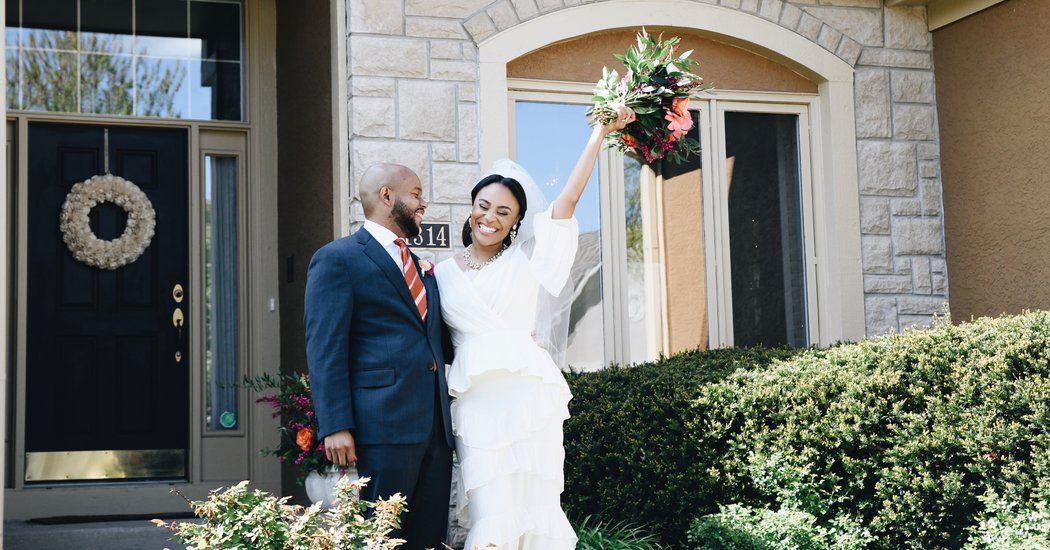 Sparks were flying between Melody Thuston and Damion Cowan even before they attended the 2018 New Year’s Eve fireworks show at Epcot Center in Orlando, Fla.

Mr. Cowan, 33, a management and program analyst for the Internal Revenue Service, also in Atlanta, first traded glances with Ms. Thuston in August 2006, when he was a sophomore and she a freshman at Alabama A&M University.

“When we were first introduced, I didn’t know very much about Melody Thuston,” said Mr. Cowan, who began to chuckle, “but I do remember her radiant smile.”

Ms. Thuston, who left the school after a year to enroll at Temple University, knew a lot more about Mr. Cowan. He happened to be dating one of her friends.

“I would hear the most wonderful things about him,” she said. “My friend told me how hardworking he is, how respectful and polite he is, on and on. So I wasn’t really attracted to him early on as much as I was intrigued by him.”

They were both intrigued enough “to communicate lightly in the ensuing years,” said Ms. Thuston, who graduated from Temple and received a master’s degree in public relations and advertising from DePaul University. She is now a senior public affairs specialist in Atlanta for the Department of Education’s office of Federal Student Aid.

“We both continued to date other people,” she said, “but at the same time, we also managed to keep an eye on each other’s social movements as well.”

In October 2017, both returned to Alabama A&M to attend the university’s annual homecoming celebration, and their paths crossed again. (Mr. Cowan finished his undergraduate and M.B.A. degrees at A&M.)

He was now living in Washington, and she in Chicago, though she would move to Charlotte, N.C., the following month. They were still dating other people, but Mr. Cowan now seemed more mesmerized than amused by Ms. Thuston.

“I couldn’t help but notice her, she was actually wearing gold boots,” said Mr. Cowan, chuckling some more. “But man, she was one beautiful woman.”

Ms. Huston recalled “being taken aback, just a little bit,” by Mr. Cowan’s confident approach that night. “He just came at me with this swagger, like he had known me intimately forever and a day,” she said.

He invited her to a fraternity party happening later that evening, and asked if she could provide him with proper contact information to ensure that she received her electronic invite needed for entry.

“That was just a slick way to get my phone number,” Ms. Thuston said.

After a weekend filled with conversations that ranged from casual to what Mr. Cowan described as “impressive and extremely deep,” they stayed in closer touch and became good friends.

“Despite the fact that I was seeing someone else during our friendship, Damion always remained very respectful and very, very kind,” Ms. Thuston said. “I think his kindness, plus the fact that he has a deep relationship with God, as I do, is what ultimately drew me into a relationship with him. I see him as a tethered spirit and a hardworking partner.”

In early 2018, they had ended their previous relationships, and by July they were an item, albeit long-distance.

“There is a certain aura that surrounds Melody, a high-energy person who brings me a sense of peace like no one else ever has,” Mr. Cowan said. “Beyond her beauty, her love of God was immediately attractive to me, as were the facts that she is a loyal, trusting and loving person.”

Mr. Cowan also credited Ms. Thuston with “helping me get out of my box,” as he put it. “Since we’ve been together, she has helped me discover a different, friendlier and more loving side of myself,” he said.”

When asked what Mr. Cowan had brought to their relationship that she had not experienced before, Ms. Thuston quickly responded: “It’s just the way he looks at me, as if no one else is there and nothing else matters. No man has ever looked at me that way.”

In August, Mr. Cowan accepted an invitation to join Ms. Thuston and her family on their annual vacation to Orlando. It was one of two trips the couple took to Disney World that year.

They took yet another Orlando trip, in August 2019, with both their families — it was the first time everyone had met. “My family absolutely fell in love with him,” said Ms. Thuston, who became engaged to Mr. Cowan on Aug. 10.

“They were able to see in Damion what I saw, an extremely take-charge kind of man, but one who is always willing to let me lead, if need be.” she said. “For Damion, it’s not about suppressing my strength in life, but rather, to put my strengths to good use in helping to solve any problems that might come our way.”

The two were married April 25 at Boone Tabernacle Church of God in Christ in Kansas City, Mo., where Ms. Thuston’s parents live and where she had grown up. About 400 guests were originally invited, though the number was reduced to nine, including both sets of parents. The threats posed by the coronavirus also caused some scheduling snafus. Flight restrictions prevented their original officiant, Bishop Tommie Murphy, who lives in Charlotte, from performing the ceremony.

But the bride did not have to look very far for a new officiant. Filling that role was her father, Bishop Lemuel F. Thuston, a senior leader in the Churches of God in Christ, who also serves as the chairman of the General Assembly, representing nearly six million parishioners globally. Ms. Thuston’s mother is Marian R. Thuston, who owns a home health care business in Kansas City.

Mr. Cowan is the son of Dwanna K. Green of Birmingham, Ala., and the stepson of Philip H. Green. His stepfather is a captain of the Jefferson County Sheriff’s Department. His mother is an executive assistant for A.I. Corporate Interiors in Birmingham.

Ms. Green said that her son and Ms. Thuston “work well as a couple because they have a relationship with Christ that is their foundation.”

“They both know that marriage takes work,” she said, “and they are dedicated to the lifelong commitment that is required.”

Bishop Thuston was also impressed with his new son-in-law. “He’s respectful, levelheaded, spiritually minded and smart. I believe he will care for Melody in a way I can be at peace at night, 800 miles away.”

Standing before them at their ceremony, Bishop Thuston looked up from his wedding charge and said, “Melody and Damion, this is your divinely appointed moment, this splendid day has been reserved from the beginning of creation, by the creator, for you.”

“Sure, life brings some disappointments, haters, misunderstandings, monstrous epidemics,” he added. “Expect some unhappy moments as you adjust to covenant living, and always remember that nothing has been able to interrupt your divine wedding date, not even Covid-19.”

Something Old and Blue The bride donned an ivory silk dress from BHLDN, as well as earrings and a necklace worn by her mother on her wedding day, 34 years ago. A handkerchief once owned by one of the bride’s great-aunts was sown into her wedding dress. The groom wore a navy blue suit from the Jos. A. Bank reserve collection, with a shirt and tie from Charles Tyrwhitt London.