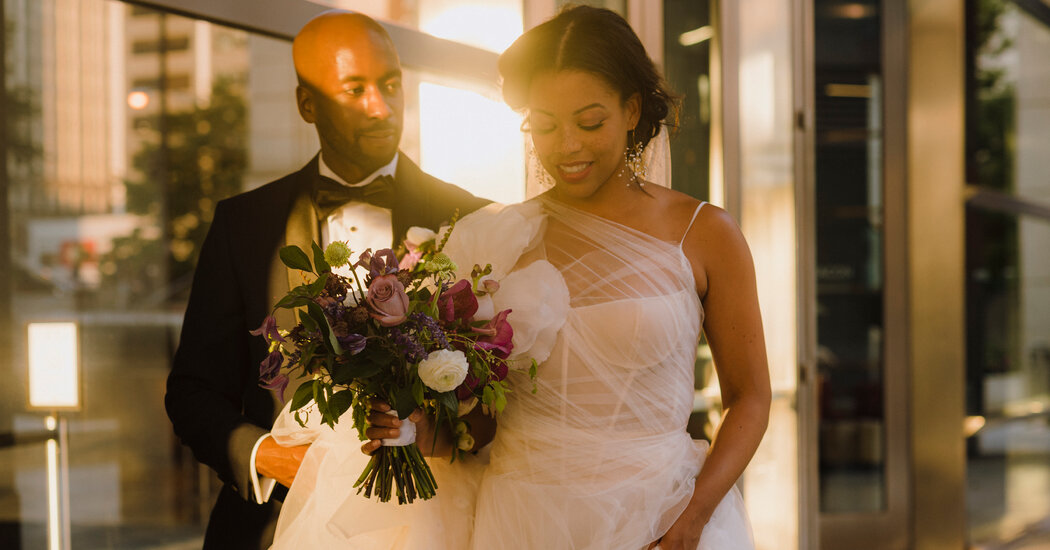 Will Ryan Jones had some time to kill before attending a party hosted by the Cameroon Embassy in Washington, so he asked Monica Marie Clark if he could tag along with her to her friend’s birthday party.

Mr. Jones and Ms. Clark had crossed paths before at mutual friends’ gatherings, but this time, they were both single. Mr. Jones, 36, a television reporter at WLS-TV in Chicago, had traveled to town in the summer of 2018 for the embassy party. That morning he found himself, thanks to friends, seated at a brunch next to Ms. Clark, 36, then a senior counsel in the legal division of the Consumer Financial Protection Bureau.

Mr. Jones, Ms. Clark and her friends moved on to Marvin, a bistro in Washington’s U Street corridor. The evening was sultry, but they found an oasis on the bar’s rooftop, where the drinks flowed and the DJ spun ’90s R&B. “I was talking about my relationship philosophy,” Mr. Jones said. “When two people come together, you should become your better selves. I think we should support each other. As I was talking, Monica’s eyes just changed. You know how in sitcoms, someone is in love and the music starts to play? It’s kind of corny, but I saw my future.”

Ms. Clark, a graduate of Harvard and Georgetown Law who grew up in Jamaica Estates, Queens, also felt a special connection. She recognized in Mr. Jones the same values of ambition and duty with which her parents had raised her and her older brother. “I feel a responsibility to achieve something because I grew up in a privileged household and I’m a Black person,” she said. “I agreed with everything he was saying. I had never had that experience before.”

They did not kiss that evening, but Mr. Jones returned to Washington the next week for a proper first date. “I wanted to see if it was the alcohol or if this is my life,” he said. While they ate hamburgers at a restaurant on the Potomac, their server pointed out some other patrons trying to get Mr. Jones’s attention — they recognized him from his reporting job in Chicago. “I planned that,” Mr. Jones said, jokingly.

Ms. Clark had noticed during their earlier interactions that Mr. Jones had a nice speaking voice, but during the bottomless mimosa brunch, she was also drawn to his smile and his understated style. “He’s reflective, he’s got his stuff together,” she said, “and he had nice style.”

It was the type of love story that Ms. Clark had always been drawn to. She is a fan of classic Black romantic movies like “Love Jones” and “Brown Sugar” from the late 1990s and early 2000s. She’d even written her own unpublished romance manuscript, “Lessons From Robin,” chosen as a Marlene Award Finalist by Washington Romance Writers in 2014. “There aren’t that many stories out there with Black characters that are just a love story that aren’t a struggle,” she said. “Whenever I saw one, it fed your soul, this is so great, a love story. I wanted to create one.”

She and Mr. Jones began a long-distance relationship, showing off their respective towns and getting to know each other. They shared similar backgrounds. Mr. Jones received his degree in journalism from Northwestern, while Ms. Clark was a news editor for The Harvard Crimson in college. Both had been raised by loving, long-married parents with high expectations for their children. Ms. Clark is the daughter of Dr. Luther Clark, a cardiologist and deputy chief patient officer at Merck, and Camille Clark, who retired as assistant executive director of Forestdale, a child welfare agency in Queens.

“I think a lot of people’s parents were like, ‘Get good grades,’” Ms. Clark said. “My parents cared about that, but they were very strategic: ‘You need to run for office, get a leadership role on the newspaper.’ Me and my brother, having parents who were very focused on the college process, it motivated us.” She now serves as the vice president of the Harvard Black Alumni Society.

Mr. Jones, his older brother and younger sister were raised in Forest Park, a Cincinnati suburb, the son of Will Jones, a retired Cincinnati Fire Department firefighter, and Marlinda Jones, a retired AT&T project manager. In 2012, Mr. Jones won an Emmy for his work with the Detroit station WDIV covering an immigrant advocacy nonprofit organization that he had volunteered with. He now chairs the scholarship committee for the Chicago chapter of the National Association of Black Journalists.

Mr. Jones said that he wanted “to be with someone who is trying to be their best, whatever that may be. If someone’s ambitious, it shows they’re not someone who is just going to settle in life.”

But as Ms. Clark said she has found out that “not everybody wants an accomplished woman. With Will, he actually appreciated that about me.”

About a year and a half after their first date, Mr. Jones wanted to propose with a grand gesture, and started with a phone call to Dr. Clark to state his intentions. “I have a younger sister; I knew if my sister would move out of Cincinnati for a relationship, there would have been a lot of drama,” Mr. Jones said. The two men ended up having a friendly 45-minute conversation.

Mr. Jones meticulously planned a proposal on Nov. 2, 2019, scheduling a haircut, a beard shaping and then an Uber to the LondonHouse hotel in Chicago where they would begin their date. He booked a saxophonist and photographer and found a spot near the city’s downtown river walk where the artists could look inconspicuous. “I went to that location probably 10 times,” he said. “I practiced getting on one knee. I checked the weather report for the last seven years: ‘Is it going to snow or rain?’ I knew Monica wouldn’t want to get her hair wet.”

The couple strolled along the Chicago river walk, and on its steps, Mr. Jones proposed with a 1.8-carat, pear-shaped diamond ring surrounded by a halo of smaller stones purchased in Chicago’s Jeweler’s Row. Ms. Clark said yes, and they hugged and celebrated while the saxophonist played tunes by Mary J. Blige and K-Ci & JoJo.

Ms. Clark found a Chicago job as senior legal counsel at the food and beverage ingredient manufacturer Tate & Lyle in Hoffman Estates, Ill., and moved in with Mr. Jones in a Wicker Park apartment with her cat, Jack. They hung art passed on to them from Ms. Clark’s mother, a Harlem Renaissance and African art collector who has donated pieces and books to the Brooklyn Museum and the Museum of Modern Art. The couple began planning their nuptials, excited to show off Chicago to their 150 guests.

Then the coronavirus began to surface. As they inched closer to their scheduled Aug. 8 wedding date, the couple reluctantly canceled their New York engagement, bachelor and bachelorette parties and watched with dread as other friends’ weddings were postponed.

On April 18, while covering a press briefing with Gov. J.B. Pritzker, Mr. Jones asked what he’d advise people considering holding weddings, reunions and other family gatherings over the summer. Ms. Clark watched from home as the governor offered a 73-second response that provided no definitive answer, and no reassurance. “I saw the writing on the wall,” Mr. Jones said. “Days later Monica and I made the decision to postpone our wedding.”

They were, of course, disappointed. But the couple decided to move forward with a small wedding and reschedule the larger celebration. “She didn’t stay down for long,” Mr. Jones said of Ms. Clark. “She’s easy to cheer up. I like that.”

While planning a smaller ceremony, the couple found themselves witnessing another piece of history: On May 31, Mr. Jones was assigned to cover the George Floyd protests in downtown Chicago. He stood on a Loop sidewalk strewn with hangers from a nearby Macy’s when a group of four young masked men walked by. Mr. Jones interviewed them for several minutes, gently reminding them to at times avoid using bad language, about why they came out to demonstrate that night. “What can the police do to improve the relationship with young Black men like yourself?” he asked.

“I got it,” answered one, stepping forward. “For real. They need to make it so that the police live in the towns and the communities that they’re trying to police,” he said.

“It’s very important to get your message across,” said Mr. Jones at the end of the interview. “You guys did a good job expressing your opinion. I appreciate you all stopping and talking with me tonight.”

Ms. Clark was again watching from home. “He was in the middle of everything,” she says of Mr. Jones. “For him, professionally, that was a cool experience, but at the same time I noticed with him and in general with the George Floyd thing, I think it had a unique impact on Black men. It was a stressful time for them in particular. He also had to deal with his own feelings about the state of America.”

Aside from several just-to-be-sure coronavirus tests, the rest of the summer passed relatively peacefully until the couple found themselves, on Aug. 8, on another city rooftop on another sticky day.

The couple’s parents, Demetrius Davis, the pastor of CityPoint Community Church, (plus two photographers, a reporter and a hotel staffer) gathered on the 17th-floor terrace of Chicago’s downtown Kimpton Hotel Palomar, sweating beneath their face masks. Ms. Jones, the mother of the groom, sported one covered in flashing silver sequins. A breeze kicked up at the bride’s arrival, lightly ruffling the oversize organza flower pinned to the Vera Wang gown she and her mother found in Chicago. Ms. Jones played DJ, pressing a button on her son’s phone, to queue up a jazz cover of John Legend’s “All of Me,” while the bride, per the hotel’s safety requirements, wore a lacy mask crafted by her dry cleaner, and walked down an abbreviated aisle strewn with mauve rose petals.

While their parents wiped their eyes, the couple held hands in front of the golden hour Chicago skyline, gazed at each other, and tried to dial down their grins. Pastor Davis read a passage from I Corinthians and in a short blessing prayed for bright days in the couple’s future. They hopped over a broom acquired from Etsy to some applause from viewers from a nearby high-rise watching from their balconies.

After cake and champagne on the rooftop with their parents but before a 9 p.m. restaurant reservations, the couple video chatted with their siblings and their families.

Before taking a four-day honeymoon trip to the Traverse City area in Michigan to hike the dunes and visit local wineries, the couple returned to their apartment to enjoy some time off with each other and with Jack, no longer just Ms. Clark’s cat. “It is now our cat,” Mr. Jones said.

Hometown Treats After the rooftop ceremony, the newlyweds cut a two-tier almond cake with buttercream frosting from ECBG Cake Studio in Chicago. “I don’t know if we’re allowed to feed each other during the pandemic,” the bride said. “We’re in the same household,” the groom pointed out.

Intimate Reception The couple and their parents enjoyed a patio dinner at Aba, a Mediterranean restaurant in Chicago’s West Loop. They dined on lamb, shrimp, hummus, as well as homemade stracciatella, a gelato, and frozen Greek yogurt. They also sipped champagne sent to the table as a surprise from friends.

Putting It in Writing The morning of the wedding, the bride and groom wrote each other cards and exchanged gifts — she gave him a Briggs and Riley duffel, he gave her diamond stud earrings. They also wrote thank you notes to their parents.